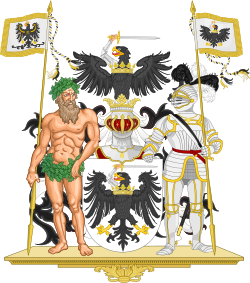 Coat of arms of West Prussia

Results of the plebiscite in East and West Prussia, 11 July 1920 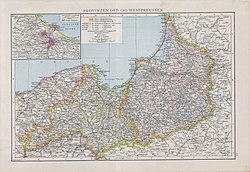 According to the article 96 of the Treaty of Versailles (signed by Germany, 28 June 1919) should in the territories of the then West Prussian districts of Stuhm and Rosenberg, the part of the district of Marienburg east of the river Nogat, and in the territory of the disrict of Marienwerder east of the river Vistula (German: Weichsel), the there staying population be ordered to decise per referendum, if they wanted living in the future under the administration of Germany or Poland. (The plebiscite area "Marienwerder".) On the 17th of February, 1920 an Interallied Commission with support by any Italian/British/French military units launched their works with the aim of the new organisation of a civil administration in these areas and of the preparation and implementation of the ordered plebiscite.

The West Prussian terrotories west of the both rivers Nogat and Vistula should ceded directly to Poland without referendum.

Entitled to vote were all persons staying in the plebiscite areas which had completed their 20th living year on the 10th of January 1920 as well as also all there non-staying people, but which were born in these areas before 1905. The referendum took place on the 11th of July, 1920 and was a clear vote for a remaining to Germany. Average 92,98 % in the plebiscite area “Marienwerder” voted "pro-German". (In some so-called “Polish” villages were it even until to 99,3%.)

Nevertheless this referendum decided the “International conference of Ambassadors” in Paris on the 12th of August, 1920, that Germny have to cede great areas of East- and West-Prussia to Poland. The allied commission and their military units left the area to the 15th of August, 1920, not at last because of the outbreak of the Soviet-Polish war and corresponding possible clashes near of the East-Prussian marginal provinces. Danzig was declared on the 15 Nov 1920 to „free town“ under protection of the League of Nations. The plebiscite area + the district Elbing were as "Regierungbezirk Westpreußen" added to the "Provinz Ostpreußen" of the state of Prussia. According to the desire of the there population was created from these five areas the new "Grenzmark Posen-Westpreußen" on the 21st of July, 1922.

According to the article 95 of the Treaty of Versailles should the expenses for the practice of this commission and their military units as well as for the preparation and the implementation of the referendum be defrayed by local revenues, and possible additional costs by the German state administration of Prussia. On order of the commission were for this aim, amongst others, printed and sold special postal stamps for the plebiscite area “Marienwerder”. These were valid as postage stamps from the 12th of March, 1920 onwards. It was planned, that these stamps should be the solely permitted stamps in this plebiscite area from 13 Mar 1920 onwards, but because of bad disposition policy of the present stamps by the officers of the commission and particularly because a greater theft of the new printed stamps at the transport from Italy to Marienwerder could be used also German stamps in this area after the 12th of March, 1920.

The stamps of the plebiscite area "Marienwerder" lost their validity on the 14 Sep 1920, but could exchanged in the post offices to German stamps still until to the 27 Sep 1920.

Media in category "1920 stamps of Marienwerder"

The following 8 files are in this category, out of 8 total.