Dunlap's Creek Bridge was the first cast iron, metal arch bridge in the United States. It was designed by Richard Delafield and built by the United States Army Corps of Engineers.[1] Constructed from 1836 to 1839 on the National Road in Brownsville, Pennsylvania enroute to the Brownsville Bridge to Washington County, PA, it remains in use today. It is listed on the National Register of Historic Places and is a National Historic Civil Engineering Landmark (1978). 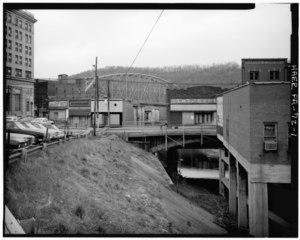 U.S. Government view from south (left) bank of Dunlap's Creek. The foreground shows the building above the foundation described below, and shows the relationship to the Brownsville Bridge, along which the later U.S. Route 40 used to run. This is the same site as a wooden covered bridge built over the Monongahela for the National Road in the early 1800s. The Amerindian and wagon road ford was located in a shallows just up river (left and south of place shown here) of the Brownsville-West Brownsville Bridge (later dredged to allow barge traffic to reach coking operations further along the south bank) off what became Water St.

It is located in the Brownsville Commercial Historic District and supports lower Market Street, the local main thoroughfare and lower town 'main street'. Facing north from Dunlap's Creek, looking up Market Street and along the eastward direction of National Road, the town and street layout forms the shape of a huge check-mark, climbing for several city blocks, then bending sharply more than 90 degrees and climbing the ridge of the drainage divide between the two tributary valleys to far off Cumberland, Maryland at the head of the Potomac River and the port of Baltimore, Maryland. This made each of these municipalities a key overland waypoint on the near-west Emigrant Trail as Americans began colonizing the midwest.
•  Due to the steep sides of the Monongahela River valley, there is only room for two short streets parallel to the river's shore and graded mild enough to be comfortable to walk before the terrain rises too steeply for business traffic. BOTH are visible in this view. The square concrete arch is actually a building foundation, the other lower street is visible in the far distance.


• Background: Two right bank large tributary streams of the Monongahela River drainage basin along the west side of the Allegheny Mountains barrier range, Redstone Creek and Dunlap's Creek, created conditions that formed a valuable ramp-like sloped terrain enabling Amerindians (for centuries) and colonials to reach a ford (crossing) the wide barrier of the Monongahela. Descending between the two small rivers, Nemacolin's Trail/the National Pike path has to cross Dunbar street to reach the ford on the upstream side of the confluence. The same two creeks and cross-river flats of West Brownsville, Pennsylvania became centers of river boat construction, giving Brownsville a historic edge as a industrial and outfitting center in near-western communities keeping it larger than Pittsburgh into the 1850s.

The following 21 files are in this category, out of 21 total.