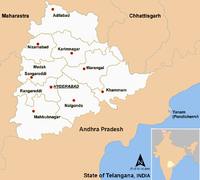 Telangana (Telugu: తెలంగాణ) is a state of India. It was once part of Hyderabad State. Telangana is bordered by the states of Maharashtra to the north and north-west, Karnataka to the west, Chhattisgarh to the north-east and Andhra Pradesh to the south. Telangana has an area of 114,840 square kilometres (44,340 sq mi), and a population of 35,286,757 (2011 census) which was 41.6% of the population of Andhra Pradesh. The capital city of Telangana is Hyderabad.

This category has the following 13 subcategories, out of 13 total.

The following 2 pages are in this category, out of 2 total.

The following 7 files are in this category, out of 7 total.