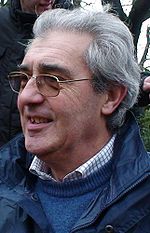 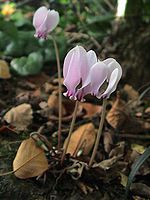 My name is Réginald Hulhoven. I am living in Veltem-Beisem, near Louvain, Belgium. I am both French- and Dutch-speaking. Because of my former occupation I am also practising the English language.

I am taking advantage of my retirement to devote myself more intensely to botany.

Since my adolescence I have a passion for botany. Botany has become in a way a second occupation.

My passion for gardening began about twenty years ago. I have a passion for above all rock plants and botanical bulbs - particularly hardy autumn-flowering bulbs, of which I have about thirty different species - and garden cyclamens. Within this framework I have special contacts with specialised nurseries of botanical bulbs as Verberghe Bloembollen, Rita van der Zalm and De Bolle-Jist, and of perennial plants as Jan Spruyt-Van der Jeugd, and experts as Mark Griffiths and Jan Bravenboer.

I am friend and botanical adviser of Ivo Pauwels - a green author well-known in Dutch-speaking Belgium - whom I have met about ten years ago during a memorable garden tour in Portugal. Shortly thereafter Ivo made an article on my hobby and we progressively became friends. Ivo has said once that my garden - although relatively small - was a living herbarium. I am reviewing and criticising his books and his articles in order to ensure their botanical accuracy.

I have participated with Ivo and other green journalists in garden tours. So, we have visited gardens and natural reserves in Portugal, Madeira, the Canary Islands, France, Wales, Ireland, and Belgium. I have also visited several times the garden fairs, among others that of Beervelde and of Hex. I have written some botanical articles in Les Jardins d'Eden – De Tuinen van Eden, among others about hardy autumn-flowering bulbs, Araceae, cyclamens, Actaea species and snowflakes, and about the flora of the Pyrenees. I have also been an advisor of botanical books edited by Ludion. Meneerke bloem (English: Mister Flower) is my nickname, given by friends of my future spouse, when I was a student at the University.

My contributions to the Wikimedia FoundationEdit

I have uploaded about 6,000 pictures, mainly of botanical bulbs, alpine and rock plants, and tropical plants. See my uploads. I am also regularly classifying and categorising pictures of plants, and moving incorrectly named pictures of plants. I am taking advantage of the wise advice of Túrelio and Orchi.