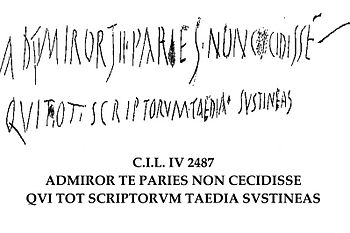 In the correct meanings of these two words, the vagina is rarely externally visible unless the lips are pulled apart. According to the way these words are usually used on Commons, most images in "Category:Human vaginas in art" should actually be in "Category:Human vulvas in art" (this certainly applies to File:Ishtar vase Louvre AO17000-detail.jpg‎ and other images on my watchlist). It's rather unfortunate that you just went ahead without paying proper attention to what these words really mean... AnonMoos (talk) 19:38, 8 January 2019 (UTC)

@AnonMoos: Post scriptum : I used the cat "Human vaginas in art" because it doesn't exist the cat "Vulvas in art". If you think that it's relevant, please create the new category and move the files in it. Thank you. --DenghiùComm (talk) 19:54, 8 January 2019 (UTC)

@SergeWoodzing: So why all the other Swedish kings are called Charles? Theyr names were certainly Carl or Karl. I think it is important in the names of the categories to have a consistency in the given names. We cannot have three or four different ways of writing the same name. This is the reason of my rename. But I let a redirect. --DenghiùComm (talk) 15:43, 30 June 2019 (UTC)

We go by what they are known as. For Swedish kings, Charles VII (actually Charles I) to Charles XV: "Charles". Current king, legal name: Carl. We don't start using a name form that never has been used for a person anywhere else. --SergeWoodzing (talk) 23:19, 30 June 2019 (UTC)

The same thing is true for some other criteria, including by registration, by title, and some others.

I know this can be confusing, but I hope this helps explain it. Please be careful when working with these categories so that we don't tag categories as metacategories when they really aren't. If you have any questions, feel free to ask. Thanks. --Auntof6 (talk) 10:15, 9 July 2019 (UTC)

@Auntof6: Thanks for your explanations. I knew that categories of categories are "catcat", while all other categories by something are "metacats". Is there in Commons a page where all this is explained and fixed? I never heard such distinctions nor rules. Thank you very much. Best regards, --DenghiùComm (talk) 14:25, 9 July 2019 (UTC)

@Auntof6: please can you answer me? I'm not convinced of what you say. Because if this were so, the 90% of the current metacats would not be metacats. Perhaps it needs a category discussion. Thank you. Best regards. --DenghiùComm (talk) 05:57, 10 July 2019 (UTC)

Metacats are explained in two places that I know of. One is at Commons:Naming categories#Categories by CRITERION, where it says "These are special categories which are useful to group other related pages (not media files) according to a given criterion. They hold only other categories and should be marked with {{MetaCat}} template." The other place is the {{MetaCat}} template itself, which says "Use this tag for meta categories only, that should only contain other categories that are grouped by a specified criterion."

The key is the grouping by a criterion. If you look at Category:Buildings by country as an example, each individual subcategory is named "Buildings in <country>" -- each one contains information about buildings that share the same location, namely the indicated country.

If you try to apply that logic to "by name" categories (and a few other "by xxxx" categories such as serial number, registration ID, and maybe others I'm not thinking of right now), you run into a snag. That's because the expression "by name" is used two different ways in Commons categories.

It's only the categories the first group that group multiple things/people with a shared characteristic: those are metacategories, and the others are not. The prefix "meta" implies that there's something more to a metacategory than just having subcategories, and that "something more" is that the subcategories are groupings, not categories for individual things or people. One clue is to look at the things named in the category name. With "Buildings by country," it's easy to understand that one country would have multiple buildings. With "People by name," it's possible that one could apply to multiple people, but if the subcategories aren't grouped that way, then the parent category is not a metacat. The by-name categories I changed back aren't grouped that way, so they should be tagged with {{Catcat}}, not {{Metacat}}.

If you have any questions, feel free to ask. I wouldn't object to having a wider discussion about this because it comes up every so often and it would be nice to have something somewhere that spells this out. --Auntof6 (talk) 06:32, 10 July 2019 (UTC)

Hi, I know this is a long shot, but perhaps you know if you came across this person in your categorisation of the Nadar photographs? It is marked "unknown person" on this photo, but it is likely he's a doctor (the image is from the Wellcome library collection), and there might just me more photos with an ID from the same session. I can't find anything (there are just too many), but if might just ring a bell with you. I hope you can solve this mystery :) Thanks, -- Deadstar (msg) 19:41, 20 August 2019 (UTC)

I'm sorry, but I can not take care of this thing. I have only categorized the files. To identify the people on the photographs is not my work. Greetings --DenghiùComm (talk) 05:42, 21 August 2019 (UTC)

A community discussion has been closed where the consensus was to grant all file movers the suppressredirect user right. This will allow file movers to not leave behind a redirect when moving files and instead automatically have the original file name deleted. Policy never requires you to suppress the redirect, suppression of redirects is entirely optional.

Possible acceptable uses of this ability:

Please note, this ability should be used only in certain circumstances and only if you are absolutely sure that it is not going to break the display of the file on any project. Redirects should never be suppressed if the file is in use on any project. When in doubt, leave a redirect. If you forget to suppress the redirect in case of file name vandalism or you are not fully certain if the original file name is actually vandalism, leave a redirect and tag the redirect for speedy deletion per G2.

The malicious or reckless breaking of file links via the suppressredirect user right is considered an abuse of the file mover right and is grounds for immediate revocation of that right. This message serves as both a notice that you have this right and as an official warning. Questions regarding this right should be directed to administrators. --Majora (talk) 21:35, 7 November 2019 (UTC)

Hi, you recently reverted a bunch of my category edits. Two things: first the Collegio degli Augustales at Herculaneum is definitely not a temple; it has a shrine in it, but so did every elite house in the Roman world. "House" admittedly is a little off for it, too, but it's much better than temple. Second an item shouldn't belong to a category and then a sub-category of that same category. So if "Lake Nemi in Art" is a category and "Nemi in art" is a subcategory, we should choose one, not both, for any given item. Thoughts? - Eponymous-Archon (talk) 11:07, 11 April 2020 (UTC)

@Eponymous-Archon: In the large exhibition on Herculaneum organized a few years ago at the Archaeological Museum of Naples, to which distinguished scholars have participated, the exact place of the discovery of the equestrian statues of M. Nonius Balbus remains doubtful. Therefore giving them the categories of both, the Basilica and the Forum of Herculaneum, is correct. As for the paintings of Lake Nemi if the village of Nemi is also shown, it is correct to assign both categories. A village is not a lake and a lake is not a village. They are two different subjects. What is debatable is that the village of Nemi is a subcat of Lake Nemi or that Lake Nemi is a subcat of the village of Nemi. Maybe we can delete both subcats and solve everything with "cat see also" at the top of the pages. Thank you. --DenghiùComm (talk) 07:08, 13 April 2020 (UTC)

Ciao Denghiù. Non ho parlato italiano da molti anni, quindi parlerò inglese. Abbi pazienza con me, prego! I got your comment on Andy's talk page when I was asking about organizing the pottery category tree. Could you walk me through the fastest way to rename categories? In the arts, there are subcategories by country. Should these be:

Pottery from Italy Pottery in Italy or Pottery of Italy?

Which is the commonly used form?

I have no preference, except to be clear. To me, as an American speaking English, the form:

Pottery of Italy Earthenware of Italy

is the most comprehensive and straightforward, but--all these forms have been used in the categories I am looking at. Thank you for your time, dedication, and patience! I'm sure these questions are repetitive. Sicklemoon (talk) 17:23, 30 April 2020 (UTC)

Hi @Sicklemoon:. I'm glad to clarify this. In Italy we have had an enormous production of works of art for 2700 years (Greek, Italic, Roman, Medieval, Renaissance, Baroque, Neoclassical, etc.). Many of these works of art produced in Italy are now located in other countries. As the categories were created in Commons, we found a huge confusion regarding the works of art. To give an example, among "Paintings in Italy" there was paintings by Italian artists who were in Rome, Florence, Venice, but also Paris, London, New York. So more than 10 years ago a group of users decided to organize the whole category-tree of Italian art in this way: works of art made or found in Italy are categorized "in Italy". Works of art made or found in Italy but which are now in other countries, are categorized "from Italy". Works of art that we don't know exactly where they are today, are categorized "of Italy", waiting to clarify better if they are in Italy or outside Italy. The "of Italy" category is at the same time the mother-cat of the two sub-cats "in Italy" and "from Italy". This is how all categories of Italian art are organized, whether by place, by era, by object or by type of art (painting, sculpture, mosaic, ceramics, glass, metals, etc.). I hope that the system applied for the art of Italy has become clear to you. Best regards, DenghiùComm (talk) 20:37, 30 April 2020 (UTC)

Ciao. Let me explain, no problem. I found the image at [3], I searched it and it seemed to me that it was Ponticelli Sabino, if I'm wrong, please correct me! I swapped towns in Europe by towns in Italy to see if someone with more knowledge of the area would do something (as you have done, thanks).

And the reversal, let me explain too. I removed the category because it is a general view of a building, there is an oculi, but many other things, which, I think, there is no need to categorize because it does not contribute anything, it's just incidental. Un abbraccio. --Joanbanjo (talk) 17:38, 30 November 2020 (UTC)

Hi Joanbanjo. I thought that Ponticelli Sabino was a name of a man, this is the reason because i asked to you. But after i found that it was the name of a village in Italy and that it was correct, and so i delete my message to you. I am very grateful to you that you have identified the location of this image which was unknown since many years.

About the deleted "oculi" i disagree with your deletion of the category. "Oculi" is an architectural element, and in that pictures of palaces you can see how they are used and where they are employed. Thank you. Best regards, --DenghiùComm (talk) 21:16, 30 November 2020 (UTC)