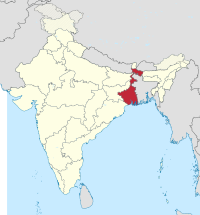 West Bengal (Bengali: পশ্চিমবঙ্গ Poshchim Bônggo) is a state in eastern India. With Bangladesh, which lies on its eastern border, the state forms the ethno-linguistic region of Bengal. To its northeast lie the states of Assam and Sikkim and the country Bhutan, and to its southwest, the state of Orissa. To the west it borders the states of Jharkhand and Bihar, and to the northwest, Nepal. The region that is now West Bengal was part of a number of empires and kingdoms during the past two thousand years. The British East India Company cemented their hold on the region in 1757, and the city of Calcutta, now Kolkata, served for many years as the capital of British India. A hotbed of the Indian independence movement through the early 20th century, Bengal was divided in 1947 along religious lines into two separate entities, West Bengal as a state of India, and East Bengal, a part of the new nation of Pakistan. Following India's independence in 1947, West Bengal's economic and political systems were dominated for many decades by Marxism, en:Naxalite movements and trade unionism.

This category has the following 23 subcategories, out of 23 total.

The following 2 pages are in this category, out of 2 total.