This page provides an overview of copyright rules of Denmark relevant to uploading works into Wikimedia Commons. Note that any work originating in Denmark must be in the public domain, or available under a free license, in both Denmark and the United States before it can be uploaded to Wikimedia Commons. If there is any doubt about the copyright status of a work from Denmark, refer to the relevant laws for clarification.

Denmark has been a member of the Berne Convention since 1 July 1903, the World Trade Organization since 1 January 1995 and the WIPO Copyright Treaty since 14 March 2010.

As of 2018 the World Intellectual Property Organization (WIPO), an agency of the United Nations, listed the Consolidated Act on Copyright (Consolidated Act No. 1144 of October 23, 2014) as the main IP law enacted by the legislature of Denmark.[1] WIPO holds the text of this law in their WIPO Lex database.

The definition of a photographic work, as opposed to image is not precisely defined. However Peter Schønning, a Danish copyright lawyer, states that for a photograph to be a photographic work it must display "the author's own intellectual creation and reflects his personality". Lacking actual court decisions however, interpretation is still subjective.

Certain maps produced by the Danish government in 1814 or later are subject to perpetual copyright.

Under the Consolidated Act No. 1144 of 23 October 2014: Acts, administrative orders, legal decisions and similar official documents are not subject to copyright. This does not apply to works appearing as independent contributions in these documents, but such works may be reproduced in connection with the documents.[1144/2014 Art.9] 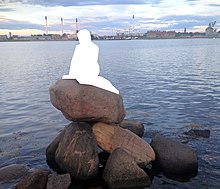 The famous statue of The Little Mermaid by sculptor Edvard Eriksen (1876–1959) is protected by copyright, and pictures where it is the main motif cannot be used for commercial purposes.[8]

Caution: The above description may be inaccurate, incomplete and/or out of date, so must be treated with caution. Before you upload a file to Wikimedia Commons you should ensure it may be used freely. Zobacz także: Commons:Informacje prawne
Retrieved from "https://commons.wikimedia.org/w/index.php?title=Commons:Copyright_rules_by_territory/Denmark/pl&oldid=535849660"