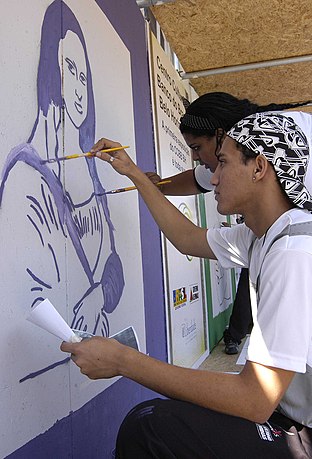 Artists copying the "Mona Lisa". The original picture is in the public domain, but both the derivative work (the copy of the picture) and this photograph would attract their own copyright.
The names of the artists are not known but they and the photographer Lúcia Sebe were working for the copyright holder, Estado de Minas Gerais (Brasil), who has released the rights under a "CC BY-SA 2.0" license.

Files uploaded to Commons should be free both in the country of origin (as defined by the Berne Convention) and in the United States of America, and possibly in other countries involved, either through being properly licensed by the copyright owner or being in the public domain.

Commons:Copyright rules by subject matter brings together a variety of subjects and aims to answer the question "Can I upload photographs/pictures of ...?"

Let's assume you took a picture with your camera, or you've scanned it from somewhere, or you've downloaded it off a web server - and want to upload it to Wikimedia Commons. How do you know what's OK and what's not? Here's a simple chart that helps you decide. In cases of doubt, read the further advice for your country first. If you still don't know for sure, ask on Commons:Help desk or Commons:Village pump in your local language.

Your own photos of:

Questionable, may or may not be OK

All kinds of copyrighted material, when uploader does not own the copyright:

Photographs, drawings, scans and other reproductions of:

Laws about copyright differ from country to country. Images uploaded to Commons, unless uploaded from the United States, involve the interaction of two or more copyright jurisdictions. The laws of individual countries differ especially in the following points:

Almost all countries in the world are party to the Berne Convention for the Protection of Literary and Artistic Works (see here for the text). Following this convention, countries enforce copyrights from other countries, according to certain rules. One consequence of these rules is that we should always care about the laws of the country of origin of the work.

When the date is unknown

Assume the most recent possible date considering the subject. The photo here shows Albert Einstein and his wife Elsa. Elsa died on December 20, 1936; Albert later on April 18, 1955. Therefore, it was taken before December 20, 1936.

When the place is unknown

Assume the most restrictive reasonably possible location considering the subject. In the Einstein photo here, it could be the United States, Germany, the Atlantic Ocean (assuming the Einstein couple was on board a ship) or any other country or location he reasonably could have gotten a photo taken in, but it would not likely be Nepal, for example.

When the photographer is unknown

Assume the most reasonable restrictive copyright barring evidence to the contrary. That is, unless the site or source itself asserts a freer set of rights (and you have good reason to believe they are not misapplying rights they do not have) assume the photographer retained all rights he legally could in his jurisdiction.

But the Berne Convention says that photographs are in the public domain 50 years after publication if the photographer is unknown. This applies unless a country has made a specific law.

Assume that the author of the image on the right is unknown to us, but not unknown in the copyright sense. We know that the image represents the ship Borda, which was scrapped in 1891. The image could have been taken that year by a 20-year-old man, who could die of old age in his 90s; this brings us to 1960. Assuming the normal terms for "works" apply and a 70-year long copyright term pma, the image would be covered by copyright until the 2030s. If the work was truly anonymous, then the copyright probably did not exceed 1891 + 70 = 1961, which means it is free if it was published before 1927 (or free in USA for other reasons).

Caution, not being able to find an author does not mean that the work is anonymous. It can mean that we did not search long enough or at the right place. See also: Commons:Project scope/Precautionary principle.

Ways to get help
Retrieved from "https://commons.wikimedia.org/w/index.php?title=Commons:Copyright_rules&oldid=616516348"