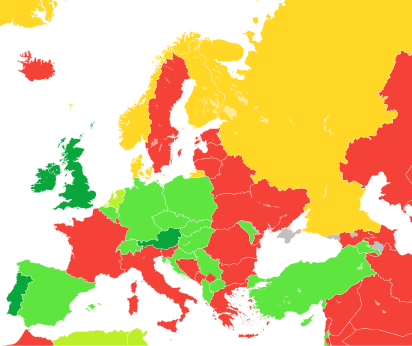 Freedom of panorama in European countries
OK, including public interiors
OK
OK for buildings only
Not OK
Public interiors are OK, but schools, opera buildings, entrance halls of businesses, and museums are not public places for the purpose of Dutch law, while railway stations are.
Inconclusive or unknown
Freedom of panorama
Africa‌Americas‌Asia‌Europe‌Oceania‌Others

In almost all countries, art, architecture, and other works are protected by copyright for a specified period. That means any photograph taken of such a work during the copyright period is a derivative work, provided (under US law) that the photograph displays the quantum of originality required for copyright protection of a derivative work.

A derivative work usually requires a license from the creator of the work. However, in about half of all countries there is an exception in copyright law which eliminates the need for a license. We call this exception freedom of panorama (FOP), a phrase derived from the German term Panoramafreiheit.

The works to which the FOP exception applies vary widely from country to country. The exception generally applies only to works on permanent public display. In some countries, this is only in outdoor public places; in others it extends to indoor places where admission is charged. It may cover only architecture, only architecture and sculpture, or all copyrightable works including literary works.

Note that in every country, even one without an FOP exception, once a work goes out of copyright it may be freely photographed. Also, the exception does not eliminate the need for a license from the photographer.

Buildings and sculptures as works of art

[pl], the author of the work depicted in the photograph is Grzegorz Sadowski.

Every building and sculpture we can see in our neighbourhood is subject to the copyright law, as far as it incorporates artistic creativity. The Berne convention, art.2-1 explicitly states so: "The expression "literary and artistic works" shall include [...] works of drawing, painting, architecture, sculpture, engraving and lithography".

Usually, the copyright law acts mention such an object explicitly as their subject matter. This is reproduced in national laws (for instance the US Copyright Law in §102-8).

The owners of buildings should not be assumed to hold the copyright of their buildings. For this reason, in countries without freedom of panorama, Wikimedia Commons requires proof of copyright release from the copyright holder when hosting any images of those buildings. If the owner of a building uploads an image to Commons, presume that they do not own the copyright. Ask them to provide either proof of copyright transfer from the architect to them, or otherwise, ask them to direct the architect to apply a Commons-compatible license to the image.

This has been reproduced for instance in § 106 of the US Copyright Law, and corresponding national laws.

According to copyright laws, then:

Taking pictures of buildings is a reproduction, which must theoretically be authorized by the architect if the right to reproduction is not in the national copyright law.

This is the situation for any derivative work based on any artistic creation.

A photograph of a building or even any scene in a city or a village inevitably depicts some pieces of architecture or even sculptures. The photograph may or may not have its own creative element, making it a work of its own, but the value of this work clearly depends on the value in the works that are depicted on it. In case of such a dependency, the photograph is deemed to be a derivative work.

This restriction on building photographs is often weakened by a separate clause for photographs or pictures of buildings in public places. However, this clause is not always made explicit in national laws.

The question of what country's law applies in a freedom of panorama case is an unsettled issue. There are several potentially conflicting legal principles, any of which might be used to determine the applicable law (see Choice of law). The law used is likely to be one of the following: the country in which the object depicted is situated, the country from which the photograph was taken, or the country in which the photo is used (viewed/sold). Because of the international reach of Commons, ensuring compliance with the laws of all countries in which files are or might be reused is not realistic. Since the question of choice of law with regard to freedom of panorama cases is unsettled, current practice on Commons is to retain photos based on the more lenient of the country in which the object is situated and the country in which the photo is taken. For example, North Korea has a suitable freedom of panorama law, while South Korea's law, limited to non-commercial uses, is not sufficient for Commons. As a result of the practice of applying the more lenient law, we would generally retain photos taken from North Korea of buildings in South Korea (e.g., File:Joint Security Area from North Korea.jpg) as well as photos taken from South Korea of buildings in North Korea (e.g., File:070401 Panmunjeom3.jpg).

Uploading images covered under Freedom of Panorama to the Commons

When uploading images subject to Freedom of Panorama provisions to the Commons, please tag them with an FoP template, which contains a legal explanation on the copyright status of the work, and sorts the image into a category of images subject to these provisions. If the country the image is taken in does not have these provisions, or only allows them for non-commercial purposes, they cannot be licensed under a license compatible with our Licensing policy and must be deleted. Please file requests for deletion at Commons:Deletion requests.

Nuances in the panorama freedom

We will discuss here the case of the German legislation. Here is the content of §59 of the German Copyright Law (Urheberrechtsgesetz, UrhG):

Quoted from an English translation.

The article above allows one to reproduce and publish photographs taken in public places. It is understood that this includes publishing the pictures in a commercial way.

German law allows photographers to take pictures that are visible from publicly accessible places. This includes private ways and parks with common access. However, it does not include railway station buildings or platforms. The picture must be taken from a publicly accessible point. It is not permitted to take a picture of such a building from a private house or from a helicopter.

The exhibited objects must be exhibited in a permanent way. If a work is presented on a public place temporarily, one may be obliged to get the explicit permission to take its picture.

A sculpture is typically placed with the intent of leaving it for an indefinite time. But if it was clear from the beginning that it would be left there only, say, for three years and then be moved to a museum, then the placement was not "permanent". On the other hand, if a sculpture was placed with the intent of leaving it "open end", but is then removed due to new construction plans some time later, its placement remains "permanent" even if the sculpture is eventually removed.

Even quickly decaying works can thus be "permanent" and therefore be subject to freedom of panorama. Street paintings, ice, sand, or snow sculptures rarely last more than a few days or weeks. If they're left in public space for their natural lifetime, they are considered "permanent" all the same. But if, for instance, an ice sculpture is exhibited only for a few hours and then moved to cold storage, it may not be permanently placed. (See also archived discussion of 09/2013).

The German law allows photography of both buildings and sculptures. The situation in the United States is different. See below.

The right to modify

The panorama freedom is restricted to taking pictures of the actual objects. Generally, the freedom to modify such pictures is restricted. For example, the German law in §62 forbids any modifications except those technically required by the method of replication.

Public domain objects are not protected by copyright, so objects of this kind can be freely photographed and the pictures can be published both royalty free and commercially, at least so far as copyright law is concerned (there may be contractual or other restrictions on picture-taking, though, especially on private property). Moreover, pictures of public domain objects can be freely modified and derivative works can be freely developed. For example, old buildings and statues where the architect or artist died more than a certain number of years ago (depending on the country), are in the public domain.

This section presents more detailed accounts of the legal status of freedom of panorama in different countries and regions. This is not legal advice, but just for educational purposes.

Click on the links to the right to see consolidated freedom of panorama rules for all countries in each broad region. The lists include countries for which rules have yet to be defined.

This page is based on the German Wikipedia article Panoramafreiheit